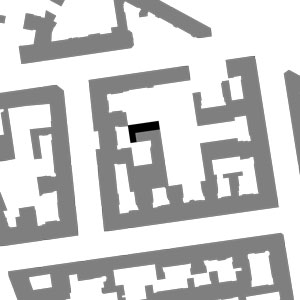 _I
I_
¯I The open-plan livingroom/kitchen
Photo: Julia Klug I¯

This former chocolate factory, built in 1870, has held a notorious reputation since the 1970s, not least because of its wild living communities. The central location in “Kreuzkölln”, an increasingly sought-after area on the border between Neukölln and Kreuzberg, makes the development particularly interesting for those on the hunt for apartments. It has only been a couple of years since the building put its wild past behind it; now most of the floors are owned privately. This is the case with

which has been occupied as a shared flat by the daughter of the owner for the last two years. When the supporting iron structure of the apartment was brought up to date with modern fire-safety standards, the opportunity arose to carry out extensive renovations to living spaces, making them fit for the decades to come.
_I
I_
¯I The chocolate factory from the rear courtyard
Photo: Julia Klug I¯ 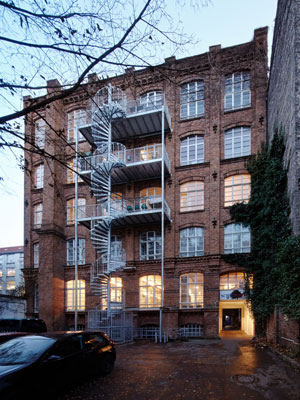 The former chocolate factory is one of the oldest industrial buildings in the area. Chocolate was produced there from 1926 until 1973. In 1976/77, the building gained

when, against the agreement of the district, the owner decided to allow the building to be converted to living accommodation. Many threatened evictions were never carried out and in following years the building continued to be used (and talked about) for house parties, hosting the first Turkish Cultural Center, as well as the "Klecks" children’s theater. It was only in the 1990s/early 2000s that the conversion to individual living spaces really began. Alongside the new fire-safety plans for the separate apartments, which included the addition of the unsightly fire escapes built onto the facade, the raw material of the building was assessed and prepared for future work. Thankfully, during this work no major, character-destroying interventions were made to the original substance of the building, despite it not being historically listed at the time.
_I
I_
¯I Aerial view
Google Maps I¯
The old factory building is situated in the rear courtyard of a compact block of houses in Berlin’s

district. Its close proximity to the canal, but also to popular locations such as the Kottbusser Tor and Hermannplatz, make the location particularly desirable. Apartment H is found on the second floor. On the ground floor is “Büro Sauspiel,” which was also renovated by IFUB*. 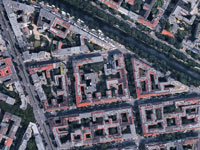 _I
I_
¯I Living room before renovations
Photo: Owner I¯ 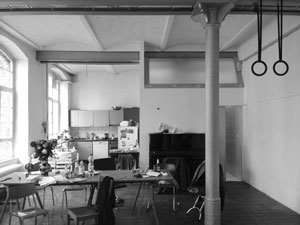 all of the built-in elements, providing a clean canvas for the redesign.
_I
I_
¯I Kitchen/living room after the renovation
Photo: Julia Klug I¯
By downscaling the former bathroom to a guest WC, the kitchen and living room was expanded, providing a generous open-plan space. The new window behind the kitchen and extended doors out onto a new balcony provide ample natural light.

the load bearing joists, ceilings, and walls leave a backdrop for the owner’s individual style and décor, alongside the attractive and valuable original tile floors. 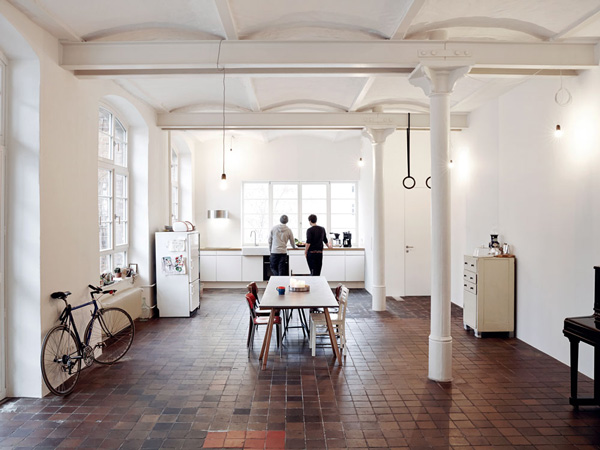 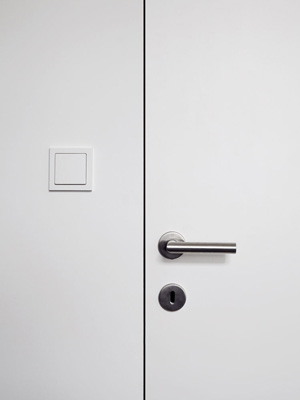 All the new build-in elements were kept minimal and unimposing, particularly effective are the

frameless white doors.
_I
I_
¯I The new kitchen
Photo: Julia Klug I¯
The kitchen is flooded with light from the new window. Incorporated into the solid oak work surfaces is an

with “Craquelure,” that was discovered in a junk shop. 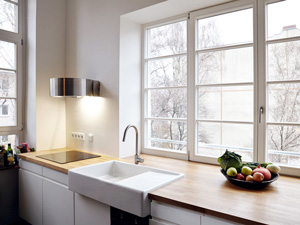 _I
I_
¯I The new guest WC
Photo: Julia Klug I¯
The guest WC is unobtrusively incorporated into the main living area. The original layout of the former bathroom can still be seen in the

of the tiled floor. The gymnastic hoops were already hanging from one of the beams before the renovation. 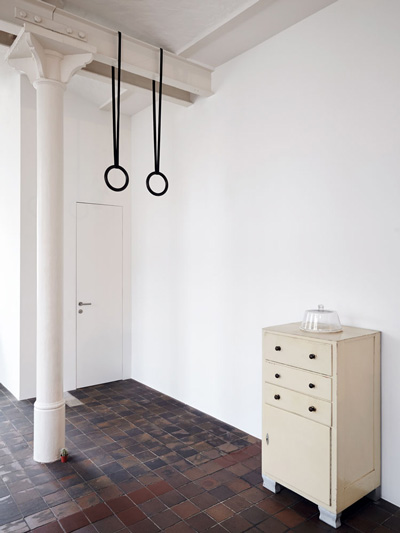 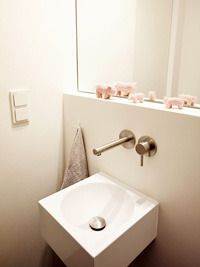 Thanks to a seamlessly incorporated large mirror and the space-saving minimalist interior,

appears larger than it is. The inner walls are painted with a special mineral paint, and the areas behind the WC and washbasin are sealed with a water-repellent 2K-PU lacquer, making them easy to clean.
_I
I_
¯I Bedroom before the renovation
Photo: Owner I¯ 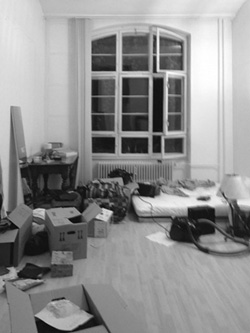 One of the rooms

Pulling up the laminate flooring in here also revealed a fantastic original tiled floor.
_I
I_
¯I Bedroom after the renovation
Photo: Julia Klug I¯
Over the course of the rebuild,

were created, with a new bathroom and an almost invisible built-in storage unit in the hallway separating the rooms.

_I
I_
¯I The former bathroom
Photo: Owner I¯ 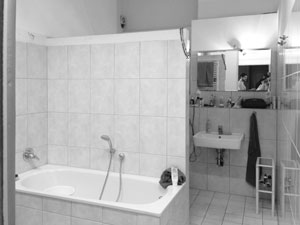 used to be located right next to the kitchen and living room. Now it has been completely removed and a new shower room built near to the bedrooms.
_I
I_
¯I The new bathroom
Photo: Julia Klug I¯ 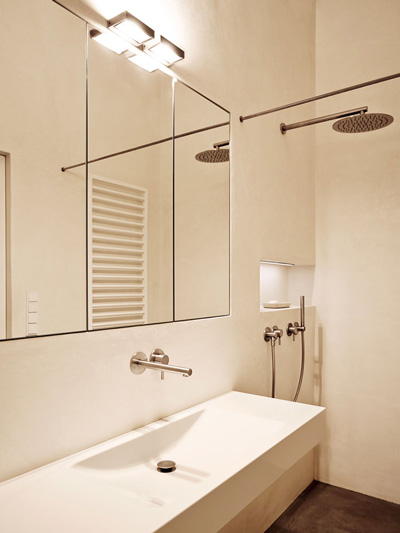 is located between two bedrooms in the center of the apartment. The clearly defined partitioning of the WC, washbasin, and shower, all linked via the extending mirror unit, creates a space that is optically ordered and easy to keep tidy.
_I
I_
¯I Traditional Moroccan plaster
Photo: Julia Klug I¯ 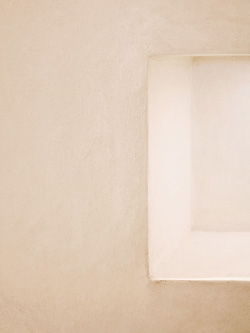 Because of the incorporation of small stones, this waterproof yet breathable material gives the surfaces a slightly reflective appearance. The light beige color of the plaster and the rounded edges, together with the visible traces of the workmanship involved in its application, create a calming atmosphere.
_I
I_
¯I The new bathroom
Photo: Julia Klug I¯

are wall-mounted, and the floor finished in a tactile waxed grey concrete that fits visually and texturally to the Moroccan plaster finish. 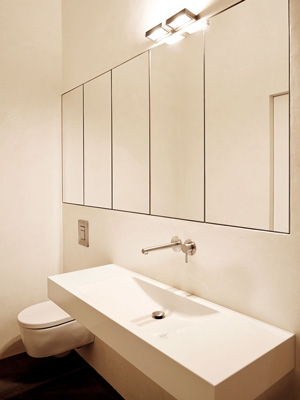 _I
I_
¯I Floor plan before the renovations
Plan: IFUB* I¯

Floor plan before the renovations 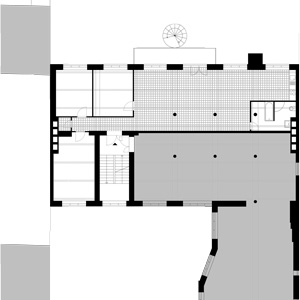 _I
I_
¯I Floor plan after the renovations
Plan: IFUB* I¯

Floor plan after the renovations 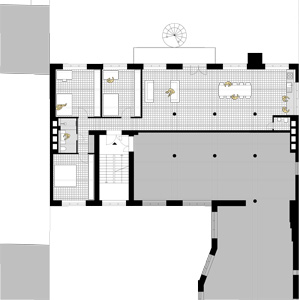 _I
I_
¯I Longitudinal section after the renovations
Plan: IFUB* I¯

longitudinal section after the renovations 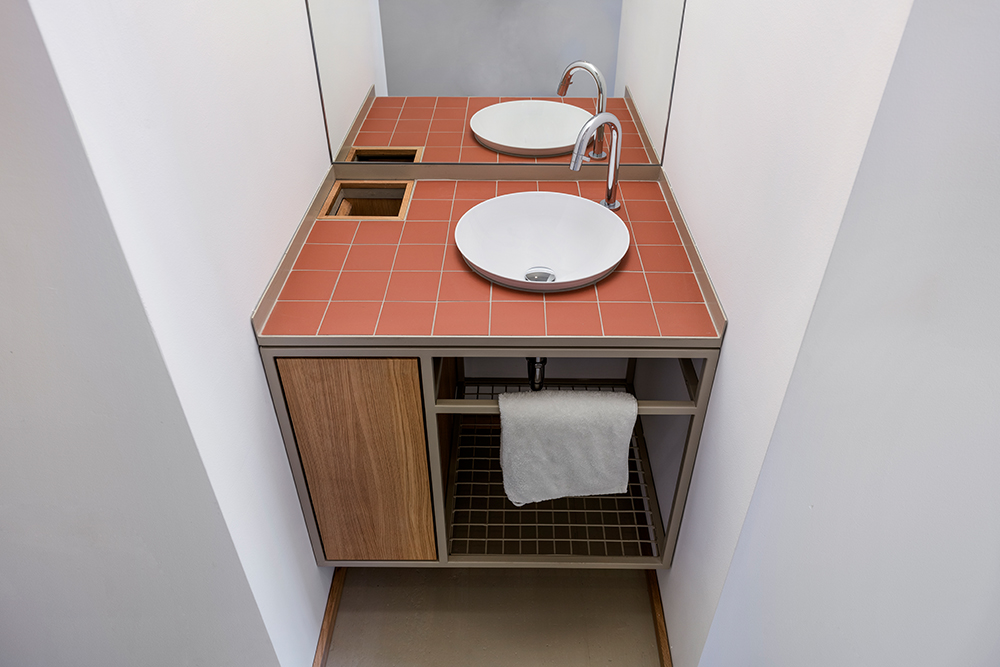